How I Cracked the Top 50 in the App Store

I think these all had a major factor in turning Sports Bet Tracker from an afterthought to something I am regularly checking up on. You can probably distill my "success" down to two/three takeaways:

I plan on releasing a decent/major redesign refresh in conjunction with iOS11. It's pretty much already done and will go into beta this week. I've had numerous people volunteer to be part of the beta, which is in itself exciting. I'll make a post about that later this week. 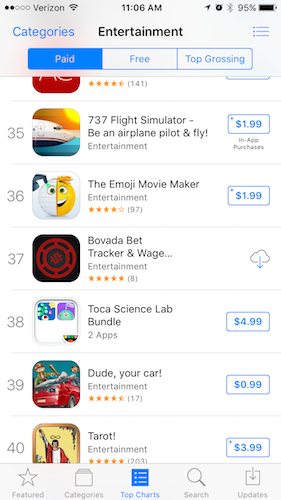 Side note: Looking back, I maybe should have made the primary category "Sports" (I still could change it), as what is the sports bettor most likely to browse? A mish mash of entertainment titles or things they are actually geared towards. In fact, I think I convinced myself to switch it with the next update.